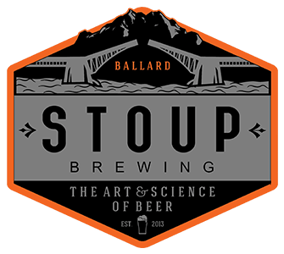 The Art & Science of Beer

Is brewing an art, or a science? With the large kettles, and pipes, and dials, and measurements involved with brewing beer it can certainly seem like a science. What is the formula for this beer? When should you add the hops? How long should it ferment? It seems like the brewer is more of a chemist. On the other hand, any of us who have followed a recipe in a cookbook, and failed, know that there is more than just following directions. How will this type of hop interact with that type of malted barley? Will this beer be bright and hoppy or dark and malty? Should we brew something traditional or experimental? Like a good chef, the brew master is an artist conjuring up beers that please the palate and excite the senses. Lucky for us the art and science of beer has found a home in the middle of Ballard.

Stoup, a word for a drinking vessel from Northern England and Scotland, in case you were curious, was founded by a chemist, a biology teacher and a gastronome. A gastronome is a connoisseur of good food and in this case, good beer. And there is plenty of good beer at Stoup. Usually there are 13 beers on tap with new seasonal brews constantly being rotated through. The beers change with the seasons so in the summer you will find a refreshing American Wheat or a Bavarian Hefeweizen while in the winter you will likely find a Winter Warmer or a Rye Barrel Aged Imperial Stout. You will almost always find a great tasting IPA, a refreshing lager or a hearty porter.

Smack dab in the middle of the Ballard Brewing District, Stoup features a wide open taproom, a spacious beer garden with plenty of room for the dog and the kids, and a food truck every night of the week. Stoup is the kind of place where neighborhood families mix with beer connoisseurs and everyone enjoys the combination of art and science.

Find out about other breweries on our tours: Seattle Breweries