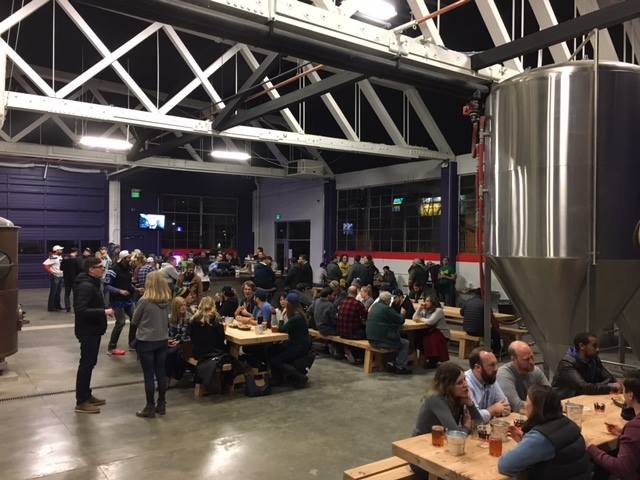 Up until 2016 this old machine shop on the edge of Old Ballard was occupied by Hilliard's Beer. They were bought by Odin Brewing in 2016 and left a perfectly good brew pub behind. Luckily for us Lagunitas Brewing Company from Petaluma, CA realized that if they were ever going to make a mark in the brewing world they had to win over the local Seattle beer drinker so they bought the old brewery.

Lagunitas Brewing Co. is no slouch in the beer department. They were founded in Petaluma in 1993 and have been making great beer ever since. Lagunitas Brewing Co. is ranked #9 in the Top 50 Overall Brewing Companies by the Brewers Association. Their move to Ballard is in keeping with their micro-brewery roots. To Lagunitas all brewing is local. As founder and owner Tony Magee told Seattle Beer News, "If you want to be local you have to walk the talk. There’s a whole scene there (In Ballard). To me, it’s a place where there is already a lot of energy and enthusiasm about beer…We just want to be able to be there and participate in that flow of folks." The beer will be brewed on site and there is a great mix of Lagunitas standards, such as their IPA, Czech Style Pilsner, and Dogtown Pale Ale, and limited releases that can only be found in the Ballard Beer Sanctuary.

The Beer Sanctuary is nice big space with plenty of room to expand the brewery and their new kitchen. They are expanding the outdoor beer garden just in time for summer. Almost every evening there will be live music and there is always an eclectic mix of local beer lovers. Lagunitas is known for their non-traditional interpretations of traditional beers and their fun labels and marketing. Visiting Ballard's Beer Sanctuary will always be fun, with old favorites and new discoveries on tap, and new friends on the stool next to you.