Don’t let your Online Business Fall into a Sink Hole 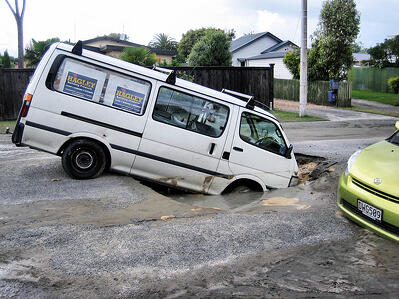 In the January 21, 2013 issue of The New Yorker financial reporter James Surowiecki writes about the sunk-cost effect. In the article Surowiecki uses the example of New York Jets quarterback Mark Sanchez. The Jets extended Shanchez’s contract and will pay him $8.25 million next year even though he has thrown more career interceptions than touchdowns. The Jets bet big on Sanchez and against all evidence they are hoping that their investment will pay off if they keep at it. This not only happens in sports it happens in big and small businesses all the time. You have invested, or sunk, a lot of time and money into a project and even though it is not getting results you continue to invest. I often see this with online businesses who have a new website that is not getting the results they need but will not give it up because they have invested so much in it. The article quotes Hal Arkes, a psychologist at Ohio State University, “Abandoning a project that you’ve invested a lot in feels like you’ve wasted everything, and waste is something we’re told to avoid”.

It’s not only about waste it is about reputations. Giving up on a project is like admitting a mistake and accepting failure is something that is very hard to do. In sports you can fire the coaches (something the Jets did do) and in business you can bring in a new manager. Not having been part of the original decision new blood can look objectively at a problem and make changes without admitting having made a mistake. This is a lot harder to do in a small business or for those of us who are sole proprietors or solopreneurs. Abandoning a failed project also goes against the common business ethos to just stick with it. If quitters never win then when you quit you are a failure. Investing more in a poor quarterback or a failed online marketing strategy is what is called “escalation of commitment” and it just deepens the sink hole.

When to Dump Your Online Business Strategy

There are definite advantages to sticking to a project, marketing plan or a business but you need to know when you are being patient and steadfast or just plain obstinate. Every successful enterprise or winning team has had its dips and disappointments but that does not mean that success is on the other side of every dip or sink hole. Any small business faced with this dilemma needs to read Seth Godin’s The Dip: A Little Book That Teaches You When to Quit. In fact one quotable Godin insight is, “Strategic quitting is the secret of successful organizations”. It is hard to admit a mistake and move on so my advice is to reframe your outlook and think like a scientist.

None of this is easy. If it were we would all be champions, but it is possible to move beyond the sink hole. In The New Yorker article Surowiecki tells how the Seattle (my home town) Seahawks signed quarterback Matt Flynn to a hefty free-agent contract. Even though the Seahawks had a lot invested in Flynn and he had a guaranteed contract, new draftee Russell Wilson outperformed Flynn and was put in the starting lineup. A heartbreaking loss in the final seconds of the Atlanta Falcons game doesn’t diminish Wilson’s role in getting the Seahawks into the playoffs.

Have you recently worked through a dip or abandoned a sink hole in your business? Leave a comment below and tell us about it.