Author’s Note: On Monday I wrote a guest blog for the International Association of Franchisees and Dealers on “How a Franchise Should Use QR Codes.” It was a bit longer than my normal blog so I’ve edited it a bit and posted the first half below and I’ll post the rest on Friday. 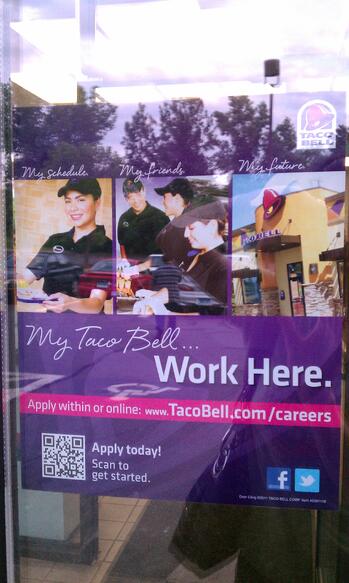 There has recently been a lot of buzz about Taco Bell’s QR Code promotion with MTV. This is often pointed out as a great example of a fast food or franchise business using QR Codes but my impression is that most franchise business owners are local business people and the Taco Bell-MTV promotion is a better example of two national brands teaming up on a national campaign. I think their use of QR Codes is inspired and this campaign will do a lot to help make the general public familiar with QR Codes but it doesn’t do much to show franchise owners what they can do on the local level. If at this point you are not familiar with QR Codes please read some of my blogs on QR Codes.

In spite of examples of large companies such as Taco Bell using QR Codes they really are custom made for small businesses. The biggest advantage is that they are very inexpensive to generate. There are a number of free and low cost QR Code Generators for marketing as well as platforms where you can build a QR Code campaign and a mobile website such as Linkblots.com. In fact Image Media Partners is now offering some QR Code Plans and Packages for businesses that offer low cost solutions for QR Code campaigns.

How You Can Use QR Codes for Franchise Businesses

Franchise business owners are like other local business owners who must connect with their local and repeat customers to stay in business. It doesn’t matter if the business is a fast food franchise, chain store or a tax service, QR Codes offer a great opportunity to bring your customers from the physical world to the online world where you can connect, engage and market to them. Image Media Partners has started a new service to help small and medium sized businesses that want to get started in QR Code marketing. It is very flexible and affordable. Take a look at our service plans and let us know if you have any questions. If you have examples on how you use QR Codes in your business let us know in the comments below.