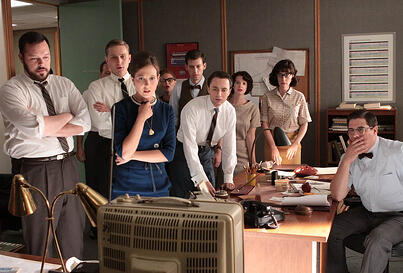 Last night Simon, an old colleague of mine from Australia, sent me a link to an article about streaming HD video over the internet. If you had changed the names and the places the article could have been written about projects Simon and I had been involved in 10 years ago. He made a comment about each generation re-inventing the wheel and I guess that is true yet we are constantly hearing about change and advances in technology. I remember 20 years ago being at a conference and hearing about the “shifting paradigm.” For most of the conference I thought a “paradigm” was a nickel short of a quarter but I soon figured it out. That paradigm seems to still be shifting, it never stopped.

When I was a kid I heard Bob Dylan singing about “The Times They Are a Changing.” Things did change but when you are young you think things will change then settle down but it doesn’t stop, things keep changing. After a while it seems that the old maxim “The only thing constant in life is change,” is true. Now it doesn’t really matter if François de La Rochefoucauld said it in the 17th Century, or if Heraclitus of Ephesus said it in the 5th Century BCE, that saying hasn’t changed much. Add the acceleration of today’s change and it makes your head spin.

I have personally been through a lot of changes. Thirty years ago I was making used car commercials and now I am a social media consultant. My first project was on super 8 film and now I work with digital HD files, too many formats to mention. There have been a lot of changes. Recently I’ve gotten hooked on the AMC TV series MAD MEN. One of the things I’ve noticed is how the show deals with change. Of course there are the social changes such as divorce, race relations and women in the work force but my inner geek likes the technology changes they must deal with such as the new Xerox, how to run the 16mm projector and the transition to television advertising. Peggy Olsen, the young, single, and only women copywriter in the advertising firm, asks her boss Don Draper, “That’s great for a magazine ad but what’s the storyline? How do we make that into a TV commercial?” In another episode Don Draper resists changes and tells Dr. Faye Miller, the consumer-research consultant, that his job is not to understand people’s childhood, but to persuade them to buy floor wax.

In a lot of ways what we are doing with social media networking, online marketing or online video mirrors the struggles with change faced by the partners of Sterling Cooper Draper Pryce. Technology keeps changing but we are faced with the same tasks. How do you persuade someone online to buy floor wax, like your Facebook page, donate to your cause, or hire you as a consultant? How do you use the current tools and technology available now to reach your audience and tell your story? A lot of us will be like Mad Men’s Freddy Rumsen, the talented but old fashioned copywriter who can’t seem to keep up with the times. Others of us may be like Harry Crane who recognized the power of television and talks his way into a new position as Head of Media and a new career. Most of us will be like the rest of the cast who stumble their way through mistakes and triumphs while trying to figure out what to do.

It is true that the only thing constant in life is change but it is also true while technology changes people remain the same. So while you are struggling with the newest streaming format and debating whether you should put the link on Facebook or Google+ remember that you are interacting with people. Give them value, give them a story, and give them something they can share with others. I have as much trouble keeping up with all the changes as everyone else but I try to keep those changes relevant to what people need. Let me know in the comments section below how you are dealing with all the changes. If you would like to learn if we can find a way to help you navigate the changes or help your website perform better online contact Image Media Partners for a free evaluation and consultation.