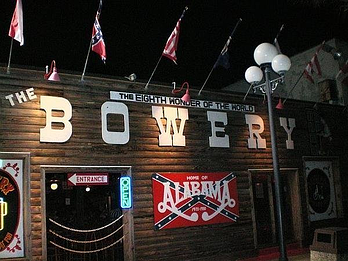 Over the next few weeks as Sindi Lindberg of SindiwithanS and I are gearing up for the Social Media Workshop 101 at the Seattle Bartending College I will be taking a closer look at social media marketing solutions for restaurants, bars, pubs, taverns, bistros and other businesses involved in the food and beverage service industry. One of the great parts of my job is the wonderful people I get to meet and the amazing things I get to learn. I just got off the phone with Michael V. Shamah, the Marketing Director of The Bowery Entertainment Group in Myrtle Beach and he taught me a bunch of things. I met Michael through the Beer & Social Media LinkedIn Group and immediately was taken by his enthusiasm for social media marketing. I was also impressed with the Bowery’s nearly 5,200 Facebook fans. I asked him how he did that and off we went on a social media marketing whirlwind.

Michael told me that, “Facebook is the best thing out there for bars and nightclubs,” but his social media journey actually started with a MySpace Page patrons of the bar put up. The Bowery has been a Myrtle Beach tradition since 1944, their house band from 1973 to 1980 was the country super group Alabama and the Bowery is a favorite for tourists and locals alike so the fact that fans made a MySpace page is not surprising. These people had a good time there and they would post photos on MySpace. Their friends would see it and go down to The Bowery to have a good time too. MySpace was driving business to The Bowery so Michael quickly took control of the page and started interacting with the bar’s customers. Michael told me, “You have to move to whatever platform people are using. I want to be where everyone else is. I talk to the customers to find out what they are using and now they are using Facebook.”

When the Bowery’s Facebook page was first put up Michael started posting fun photos from the bar. With over sixty years of accumulated stuff there were a lot of fun signs on the ceilings and walls. It seemed that when the first photos were posted they would get a few likes but soon they were getting 20 likes for each photo then 30 likes and then when the photos were shared by others on Facebook their fan base just started to grow and grow. He did other things to encourage interaction like giving away a T-shirt to a randomly picked fan who had tagged themselves in a photo uploaded to the Facebook page and there is usually a “Free Admission” Deal on Facebook Places. Free admission o 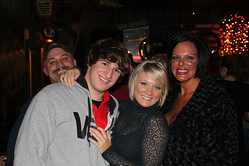 r a free T-shirt is a modest marketing budget that keeps his customers coming back. The staff is also actively involved. The entire staff knows about The Bowery’s social media efforts and about eight staff members have administrative access to the Facebook page. This means that the cooks, the wait staff, the managers and the house band all participate in the conversation and interact with the customers online.

I asked Michael if he had one word of advice for restaurant, bar and nightclub owners and he said, “Facebook, Facebook, Facebook.” I guess it bears repeating. His other advice that bears repeating is, “You have to move to whatever platform people are using.” If your customers are on Facebook that is where you need to be and if you don’t know, just ask, they’ll tell you.