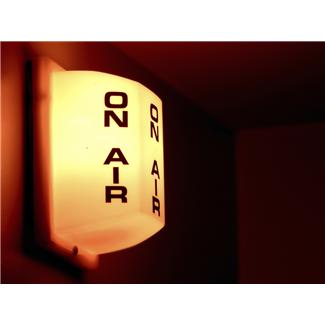 I have recently started to do webinars. I admit this is a bit belated but the thing that is most striking to me is how much doing a webinar is like doing live television. Granted, there are a lot of differences especially concerning the technology and scale of the enterprise. When I first started working in broadcast television in the late 70’s and early 80’s most of what we did was live. News, talk shows, specials were all live. At that time we had millions of dollars of technology and at least a dozen people on and behind the camera for every live broadcast. It was a big effort.

In contrast, using software like Citrix’s GoToWebinar I can do a webinar by myself on my laptop with just a connection to the internet. So there are dramatic differences. The technology is cheaper and more accessable and it doesn’t take an army of engineers, technicians and talent to pull it off. Another difference is that thirty years ago there were only two other broadcast competitors in our market so we were guaranteed an audience. With a webinar you need to work for your audience. Of course having an audience of 100 people 30 years ago would get your show cancelled and a webinar with a 100 attendees is a success. There is often a higher video quality in live television but often not much live interaction with your audience. So how are they similar?

The similarities between webinars and live TV broadcasts have more to do with what you are trying to accomplish and how you approach it.

Real Time: You must communicate with and engage your audience in real time. If you lose your audience at the start you will not get them back. When you are live there are no “do overs” or re-writes. Any mistakes are there for all to see. In broadcast TV people got fired for making mistakes on-air.

Time Limits: In broadcast there are strict time limits and there were two things you never did: start late and go overtime. This is looser with webinars and I think this is a big mistake. You can’t abuse your audience by starting late, under delivering by going short or taking up their time by running late.

What can you do to improve the quality of your webinars? Learn from the broadcast industry’s hundred years of experience.

Transitions: Usually the parts of a live broadcast that cause the most problems are the beginning, transitions between different segments and the ending. If you practice nothing else practice these three things. Make sure your presenters know what their cue is to start and what they will do at the end of their presentation. Does everyone know what controls or buttons they must use to put up their slides or camera? Script out and practice the beginning and the ending of your webinar. Nothing sounds so unprofessional as the host or moderator saying, “Well, I guess that’s it…. Um… if no one has any other questions? Bill, you want to say anything? No? Um, ok, I guess we’re done…..”

Backup plan: Broadcasters accept that Murphy’s Law is an immutable law of nature. If something can go wrong it will. If your presentation is complex, if there are lots of disparate parts,  if you are depending upon new technology then something is going to go wrong. What will you do if the video doesn’t play? What happens when the presenter from Mali (or Milwaukie) cannot get online? What do you do when you cannot open the slide program?

Even though it may seem like there is a world of difference between a simple webinar and live broadcast television there are a lot of similarities and many of the things broadcasters do to make a professional presentation can be adapted and copied when you prepare your next webinar.